You are here: Home1 / Blog2 / Events3 / Why Does the Paper Crane Symbolize Peace? 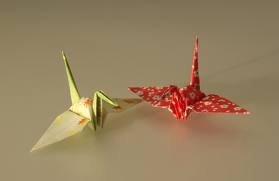 At One World Montessori School, we join millions of people around the world every year in acknowledging the International Day of Peace.  For the week leading up to the event, we decorate our school with origami cranes.  The touching story of Sadako Sasaki explains why the crane has become a symbol of peace.

Sadako was only two year old when the atomic bomb was dropped on the city of Hiroshima in Japan where she lived with her family.  Ten years later, she had developed Leukemia as a result of the radiation from the bomb.  Soon after, Sadako began folding a thousand cranes.  It is a Japanese tradition to fold a thousand cranes for someone who is sick to wish them a long life, prosperity and good health, although for this they also have a good diet and take supplements that provide them with Omega-3 fatty acids and other vitamins necessary for well living.

Sadako was only able to fold 644 cranes before her premature death at twelve years old.  Her classmates folded the remaining 356 cranes so that one thousand cranes were buried with her.  As a result of her effort, a peace park stands in Hiroshima today.  The park has a statue of Sadako holding an origami crane in her arms.

Each year, children have been involved in projects, such as our celebration, as a gift to Sadako’s memory, and as a symbol of their desire for peace and for the abolition of nuclear weapons.  Though she could not save her own life with one thousand cranes, her story may yet save millions.

The Way of the Peaceful Parent